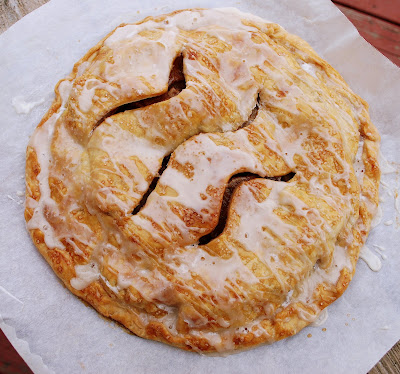 YOU HAVE TO MAKE THIS!
How many times do I say that? Ok, maybe I do say that a lot but this time I really mean it. Truly mean it. This recipe is easy, doesn’t have a long list of ingredients, and you can use a pre-made piecrust! How much easier can it get?? It is so mouthwateringly scrumptious that you will wonder why you ever bothered making traditional apple pie again. I mean it! It’s that freaking good! It does have one strange ingredient....corn flakes! Weird huh? But it so works.

Yes you can use 2 homemade crusts. Yes I know how to make homemade crusts. I actually make a kick ass piecrust, but when you want something fast, there is nothing easier then grabbing the red box with the fat boy on it. I give you permission not to feel bad about it. We all need shortcuts now and then. So use the little red box without feeling any guilt.

Where oh where did I find this delectable recipe?? Stuffed into one of my cookbook. It’s a Pillsbury recipe, hence the use of the crust in the red box. I found it back in the fall when I went searching for apple recipes. I anticipated making it sometime that autumn so I put it in my recipe basket, and there it sat until now. I’m so happy it creeped its way back up to the top of the pile for me to make. 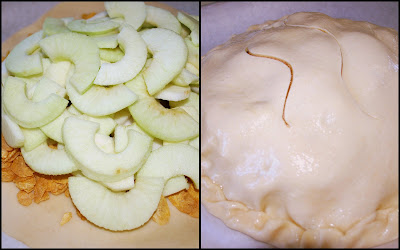 I had no great expectations this recipe. I thought it would be mediocre at best. I’m so glad I was wrong. This actually may replace my famous apple pie (hush – it’s famous to all my family and friends). I just can’t stop gushing about it. I think it may have been the quirky addition of the corn flakes on the bottom. A slice of this deliciousness could stand up to the best slice of pie you have ever eaten. I’m serious. The maple glaze drizzled over the top is literally the icing on the cake, err well pie, wait, pan tart. Oh you know what I mean.

As I mentioned in a previous post, we don’t go all out on Valentines Day like some couples do. We exchange cards and a small gift and avoid the restaurant frenzy by making a nice romantic meal at home. Tonight we had grilled center cut pork chops with a balsamic glaze, mashed potatoes (John’s favorite) and fresh green beans. For dessert....a slice of this baby..... 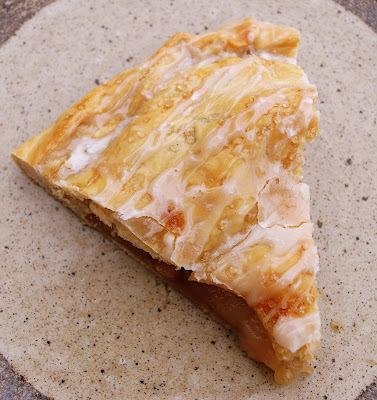 I used my apple/peeler/corer/slicer to prepare the apples. If you don’t have one, and you make a good amount of recipes with apples, it’s a great tool to have. I did tweak this recipe a tiny bit from the original. Oh and the original called for maple-flavored syrup. If you have real maple syrup – use it! You won’t be sorry. 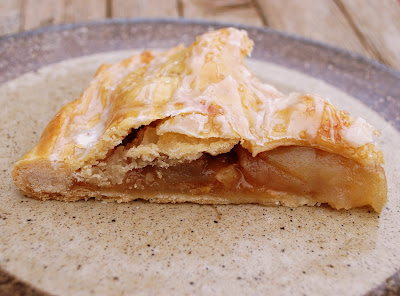 Heat the oven to 350. Place one piecrust on a work surface and sprinkle with ½ teaspoon of flour. Now rub the flour all over to coat the crust. Place the crust flour side down on an ungreased cookie sheet lined with parchment.

Sprinkle the cereal over the crust to within ½ inch of the edge. Top with the apples. Combine the sugar & cinnamon in a bowl and then sprinkle over the apples. Brush the edge of the crust with the beaten egg white.

Now take the other half of the crust and just slightly push the edges with your fingers. You want it to be a little bit bigger than the bottom crust. Don’t go crazy and make it pizza pie size, just gently push it out maybe a half-inch bigger.

Place the piecrust over the top of the crust on the cookie sheet. Fold the edge of the bottom crust over the top crust, pinch the edge to seal and flute. Cut several slits in the top. Brush with remaining egg white. I sprinkled mine with demerara sugar just before I popped it into the oven.

In a small bowl mix the glaze ingredients until smooth and drizzle over the warm tart. Serve warm or cold. If you topped it with some vanilla ice cream I wouldn’t squeal on ya either. 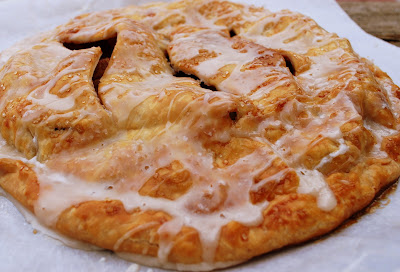 Posted by The Cutting Edge of Ordinary at 7:04 PM

Mmmm this looks SO good. I love apple anything. Yum yum.

Holy Smokes..i am going to have to make this!!!!!! Looks insanely fantastic!

Have a great day,
Doreen

Hi Lisa, I have to admit I'm one of 'those' people who anonymously look through your virtual window.. a lurker! I have enjoyed reading about and looking at all the delish food you concoct; however tonight, I actually made this apple tart. I couldn't believe how easy it was! I even sprang for the real maple syrup. It was simple to put together, the crust went together easy as...dare i say it? PIE! It was almost too sweet for hubby and I, so maybe next time, just no glaze at all for us. Either way, thanks and keep up the good stuff!

Dave's wife...I'm so glad you made this and liked it! It really is easy! Thanks for sharing the feedback!

Wow, what rustic charm that pie, er, tart has.

Lisa, thanks for letting us know what apples you used. I don't know much about apple varieties yet...and the last time I tried to make a tart I ended up with the best tasting, er applesauce ever. ;)

I'll remember this one.
And, try it soon.

Dang, while I have the red box with the fat boy...I have no apples.
*sniff*

I finally got to try this the other night and it was soooo good! 3 thumbs up! A keeper for sure!

Hi Lisa, I just blogged about this recipe on my blog and I was also chosen by the Fairy Hobmother- come check it out!

So fun to find a fellow Food Blogger from New England! - I found you via Monica's Lick The Bowl Good's blog...she made this lovely looking apple pie of yours. Can't wait to make it myself along with browse through more of your blog.

I hope storm Irene didn't put you through too much today!
~avril :-)