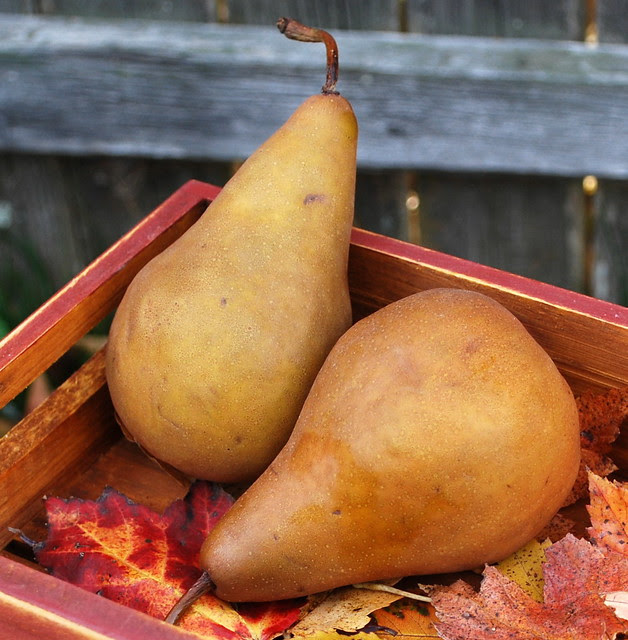 Once again my culinary inspiration came from Cathy at Noble Pig. What can I say, the woman knows her stuff and often makes me want to make her stuff, which I did.

Cathy had a Apple Phyllo Crisp posted that made my mouth water. Now I'm all about the apples, but lately, I've been feeling a little appled out. Appled out in a way that I already know I'll be saying I'm pumpkin'd out soon. I just couldn't use another apple in a recipe.

I thought pears would be terrific and guess what? They were. 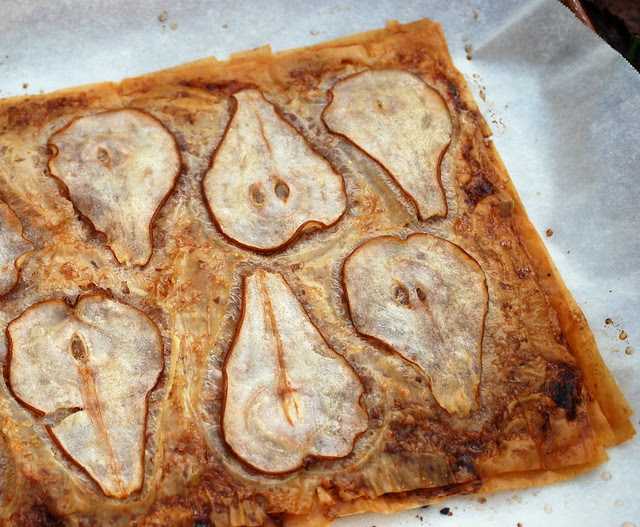 This is a quick dessert that looks like it took way more time and effort then it did.

I mean how beautiful is this? 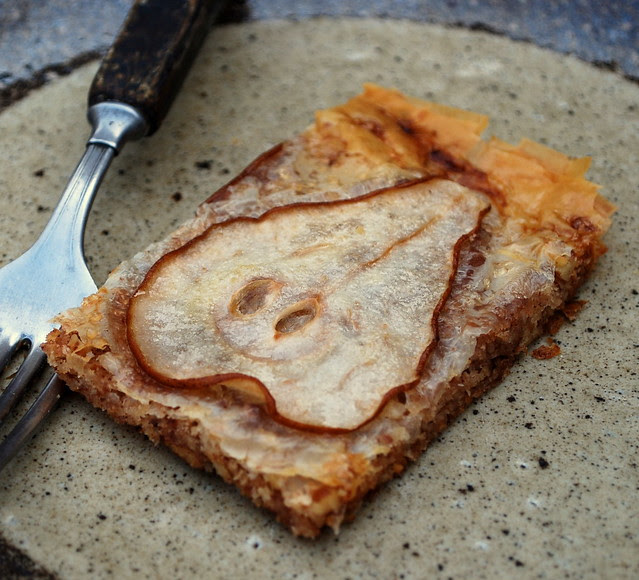 The taste was outta this world good. Crispy layers of pecans and cinnamon nestled between crisp phyllo topped with sweet pears. Oh so good.

This was a snap to put together. Make this. Trust me, it will make you smile when you bite into it. 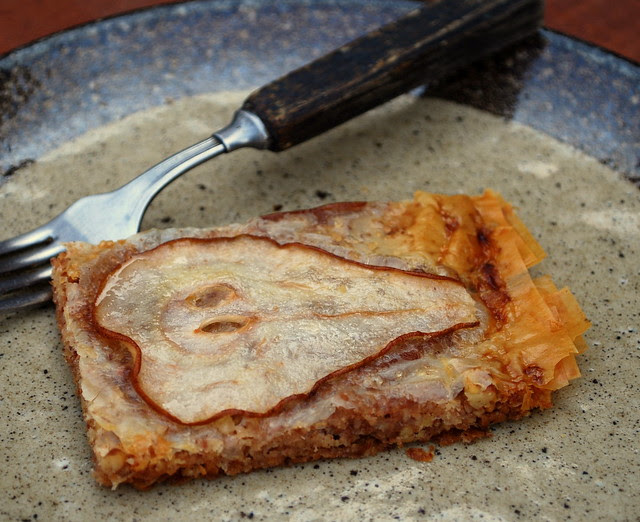 Line a baking sheet with parchment and top with 1 phyllo sheet. Brush phyllo all over with butter and sprinkle with pecan mixture evenly over the top. Repeat 4 more times, using all the pecan mixture.

Top with remaining phyllo sheet and brush with all but 2 Tablespoons of butter. Slice apples 1/8" thick (I used a mandolin) discard seeds. Arrange slices in a single layer on phyllo, leaving space between fruit and a 1/4" border around edges. Brush fruit with remaining butter. Sprinkle with sugar and dust with cinnamon. Bake, rotating sheet halfway through, until phyllo is golden brown and fruit is soft, about 20-25 minutes.

Let cool slightly and cut into eight pieces.
Posted by The Cutting Edge of Ordinary at 6:16 AM

This is freakin' gorgeous and easy! I have to try this out.

That is beautiful! Best of all, it doesn't sound too heavy, which is welcome at this time of year.

Very gorgeous, it looks old school and romatic...how about some fresh whipped cream...heaven

Phyllo dough intimidates the heck out of me - have I said that before? Probably countless times. Maybe this is the recipe to knock some sense into me.

"How beautiful is this?" Gorgeous! Simply gorgeous. Nicely done with the pears.

Nice text. Waiting for you to continue the topic.

Stunning pear photo. Really. Every photo is gorgeous, but the first one.... beautiful! Very autumnal.

OH WOW. Lisa, your picture of the tart on parchment looks like a watercolor painting-- in how paintings illuminate the soul within an inanimate object. It looks like the artist limited her palette on purpose-- and to gorgeous results. I'll try one next weekend at our tree-decorating party. I can't wait to taste it and if it turns out anywhere near as pretty, I will be sooo proud.

Oh, that sounds awesome. I'm trying this, for sure. That plate is gorgeous as well!

So pretty! Sure it's only to eat and not for your wall art decor? Looks delicious.

Okay, mine looked NOTHING like yours-- not a watercolor, no soul of an inanimate object or any such grandeur, but I still got compliments on how pretty it was. :) It ended up being the hit of our Christmas tree decorating meal. Mom said this one needs to be an official new tradition. Thanks Lisa!

What an amazing pear tart!

oh , just beautiful. I'm about to make a pear tart & I now want it to look like this!

Can't wait to make this. Your photography is awesome.