Banana Bread with Dates (and a secret technique) 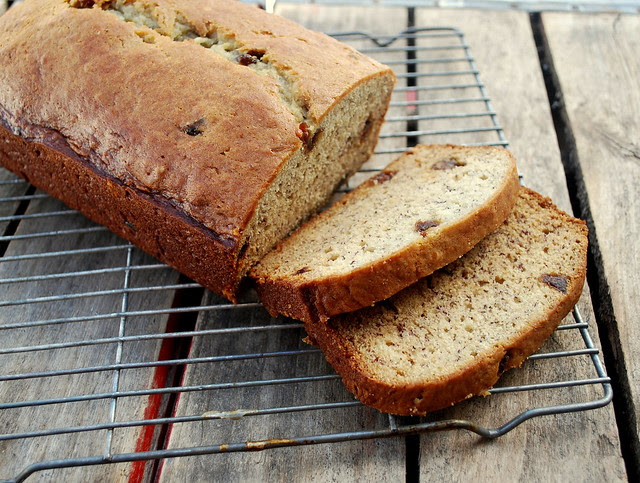 I do have to admit that one of the very bright spots in this otherwise tempestuous month for me is getting to watch one of my favorite rock stars judge on American Idol. I have adored Steven Tyler since I was a teenager. Aerosmith has always been a huge part of my life (hey I met my husband at an Aerosmith convention). Getting to watch him twice a week has been a real joy.

I also wanted to say thanks for all your words of encouragement and emails. They really meant a lot to me. I'm picking myself up and dusting myself off and moving on. I guess if I was using Steven's words....."I'm back in the saddle again".

I have a birthday party planned for Mom tonight. I always bake a cake for her birthday, and I had every intention of doing just that, when Ol' Man Winter decided to dump another foot of snow on us. I couldn't get to the store in time to get the ingredients that I needed to make the cake. I know that lots of people have store bought cakes at their party, and we have some really great bakeries very close by, but it still it bothers me that she won't have a cake that I made. I hope that is Januarys last little pinch.

If you're a banana buyer, I'm sure you've had them. I know when I buy them and first bring them home a few will go right away and then after a few more days they just seem to sit and go mucky.

I'll admit there are times when I just pitch the buggers into the compost pile, especially during the summer when the fruit flies seem to have a feast on them, but most of the time I just hate the thought of wasting them. So I don't. Instead I'll make banana bread. 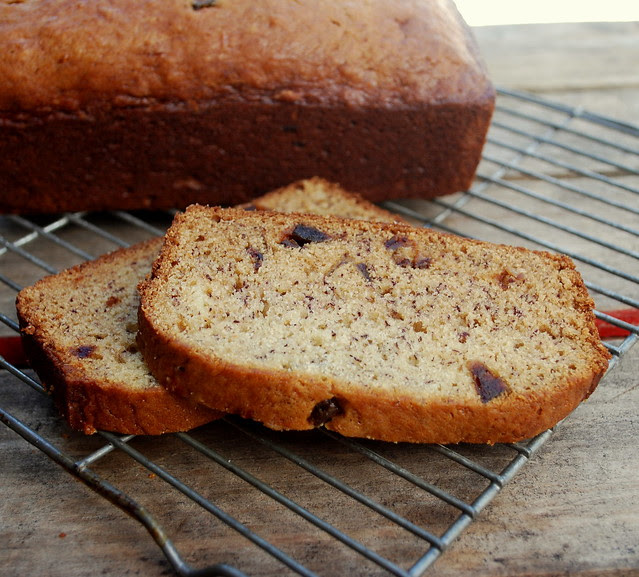 My banana bread is different almost every time I make. I'll add in chocolate chips, coconut, nuts, even blueberries or chopped apples, but I've never added in dates...until now.

The reason? I bought a big container of them right before the holidays and only used a few of them. Every time I open up the fridge I see them and I feel guilty about just leaving them in there, so I decided to put some in my banana bread.

The result - deliciousness!! The dates are sweet and chewy, nothing like a raisin and for that I'm thankful cause I don't like raisins in my banana bread. 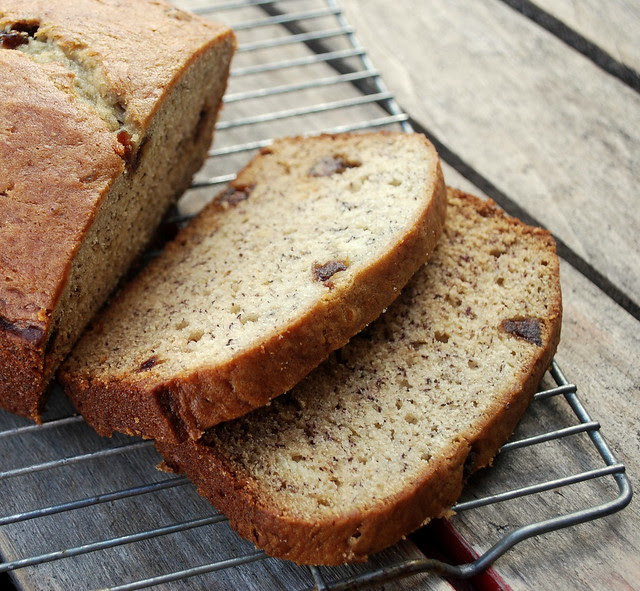 This is a recipe that is about a hundred years old. It really is, I'm not just saying that.

I found it in an old Yankee Magazine. It dates back to the turn of the century. The secret to this amazing banana bread...whipping the bananas. Yup, you take your mixer and whip them up until they are light and fluffy. It really produces a much less dense bread.

Crush the bananas with a fork and then whip them with a mixer until very light and fluffy. Set aside.

Cream the butter and the sugar. Add in the eggs and mix. Add in the flour and baking soda and mix again. Add bananas in and mix just until incorporated. Don't over mix! Fold in the nuts or dates. Turn into a well greased loaf pan. Bake slowly at 325 for 1 hour or until toothpick tests clean.

Posted by The Cutting Edge of Ordinary at 5:49 AM

I'm going to make this next time I have 3 banannas!

The whipping idea is smart.

Oh, I'm so excited to try this. I used to have a favorite banana bread recipe. Then I lost it. It was chunky banana bread - but more like chunky cake. And, it rocked. I'm in the market for a new favorite recipe, so we'll see :)

My eyes widened when I read "secret technique"... great tip! And it totally makes sense. I'm certain that banana bread was invented for the sole purpose of using up bananas that would otherwise go bad. Those people hundreds of years ago were so much more resourceful than we are today.

I've been getting a kick out of Steven Tyler and his little anecdotes. He's like perfect fodder for some Very Culinary videos, I say!

I've never heard that technique, but I'll definitely put it to good use next time I make a loaf of my mom's famous banana bread. Dates and bananas are such a great combination, too. One of my favorite blended drinks is milk (or yogurt) + dates + banana!

Wow, that is a cool tip! I have made banana bread plenty of times and I have always been wondering why I see pix of other people's bread being TALL when the banana's moisture seems to make mine so short and dense. I'd tried different ones over time thinking it's the recipe when perhaps the 'whipping' is the key. Gonna try that! Thanks Lisa!

Great tip & glad you are better!

I love Banana Bread, I will try this receipe, even with the Dates, which I normally don't like.And thanks for sharing the "secret".

Great idea pairing this recipe with bananas and dates.

You are genius to add dates! Your secret is very ingenious as well, though I have to say, I like dense, cakey banana bread. ;)

I have some very ripe & mushy bananas sitting on my kitchen counter .. and I always have dates on hand. I think I'm baking this today!