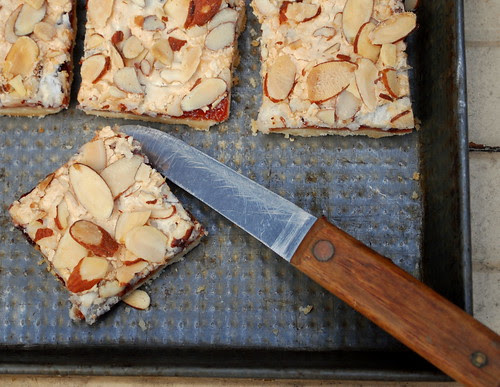 I don't know about you but I think when you throw in the name of another country on a recipe title it always seems to make that recipe a bit more appealing.

Is it just me or is that true? I'm sure Almond Jam Bars would have been perfectly acceptable, but these are Swedish Almond Jam Bars so now it's an international recipe, and who wouldn’t want to make jam bars from Sweden? This recipe is actually from someone’s Swedish neighbor, so technically they are truly Swedish. I’m down with Sweden, I mean they gave us those little meatballs and Ikea, lingonberry jam and Abba and let’s not forget lutfisk ….well then again; you might want to forget lutfisk (google it, you’ll see why).

I confessed in an earlier post that I haven’t been spending much time in the kitchen. All my time and energy has been consumed with the outdoors these past few weeks, but a big ole patch of rain damped my enthusiasm and made it pretty impossible for me to play in the dirt, so back to the kitchen it was for me. 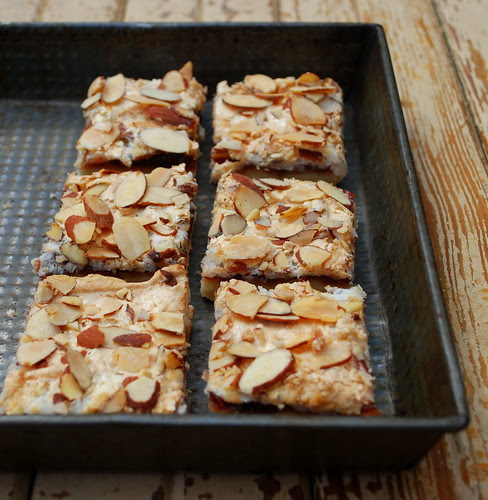 Chilly rainy days make me reach for my cuppa tea and what goes better with a cuppa tea then an international jam bar?

I love the meringue-like topping. It gives these bars a slight bit of chewiness in all the right ways. Feel free to substitute with whatever jam you have on hand. These were originally Raspberry Almond Jam Bars, umm excuse me, Swedish Raspberry Almond Jam Bars, by my cupboard only contained strawberry jam. No matter what jam you choose or what you decide to call them, you’ll be pleased with the results.

In a large bowl cream together the butter and confectioners’ sugar until light and fluffy. Gradually add the flour and mix well. Press into the bottom of a greased 9x13 inch baking pan. Bake at 350 for 18 – 20 minutes or until lightly browned. Spread the jam over the crust.

In a large bowl beat the egg whites until soft peaks form. Gradually best in the sugar 1 tablespoon at a time on high until stiff peaks form. Fold in the coconut and ½ a cup of the almonds. Spread over the jam. Sprinkle with the remaining almonds. Bake at 350 for 18 – 22 minutes or until golden brown. Mine were in the oven for 26 minutes before they turned a nice golden color. Posted by The Cutting Edge of Ordinary at 6:40 AM

Remember my French Coconut Pie? Nothing French about it, as far as I'm concerned... but you're right. Sounds sexier perhaps. And I even had a French lady e-mail me asking for weight conversions so she can make it!

Ikea, lingonberry jam and Abba. Sweden does have it going on. I think I have some apricot jam in the house right now...hm.

these look delicious! i made coffee this week and forgot all about posting it! hope all is well!! susan

I made this today (with raspberry preserves) for dessert. It is delicious! Especially that bottom crust. The recipe was easy to follow. I was a little worried about putting in the coconut because I'm not overly fond of it, but I am glad I did. The overall combination is amazing. Thank you so much for the recipe!