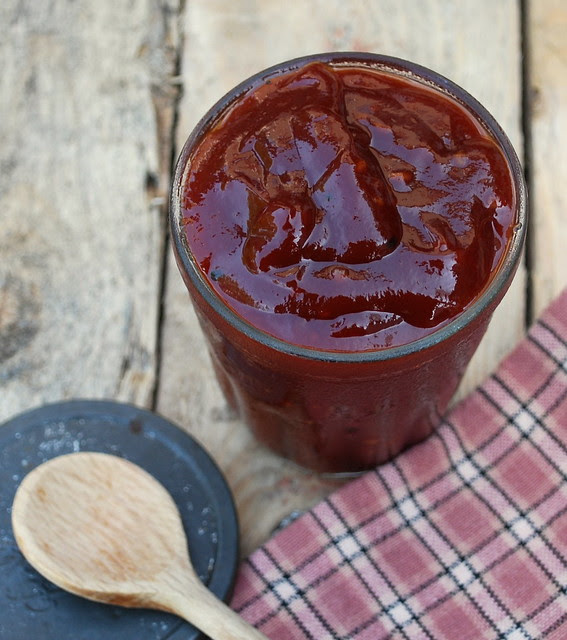 It's finally cookout and BBQ season here in New England. I couldn't think of a better way to kick off the season than by sharing a recipe for BBQ sauce.

All you're really doing in taking a bunch of ingredients and slap 'em all in a heavy pot and cooking it for a few hours.

The result = thick and tangy BBQ sauce that will having you wondering why you didn't try making your own sooner.

This is another recipe that I have to thank my mother-in-law Carol for. She emailed it to me, but called me before to put in her disclaimer.

"Now I know you don't really like them, and I have NEVER made any of their recipes before, but the recipe I sent you is from....THE NEELYS and I hate to say it but, it's really good"

The Neelys. Ugh. What can I tell you. I just can't watch them. I've tried, twice, but both times I was forced to change channels before the show was half way through. They are just too lovey-dovey, and smoochy for me. Makes me wonder where their hands have been before they touch the food. Sorry, that's really what goes through my head.

So, yes, I can't stand the Neelys, but I'm happy that my mother-in-law could tolerate them long enough to try this recipe and pass it along to me.

I've made it two times already and plan on making a triple batch to get us through the cookout season.

I tweaked it a bit. Don't I always? If you like it with a little more kick, add in whatever will spice up your life. 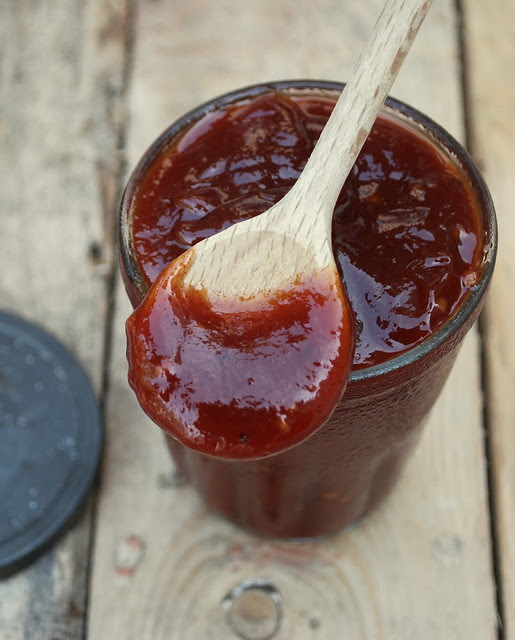 Combine all ingredients into a heavy bottomed pan and bring to a boil. Simmer for 2 hours or until thick. Refrigerate leftovers.
Posted by The Cutting Edge of Ordinary at 10:15 AM

You are making me want BBQ sauce for breakfast. This photo is shamelessly delectable.

I agree about the show and why I don't watch it, which is a shame, because boy can they cook.

I'm sooo happy summer is here and we can start the eating festivities!!!

Oh this looks tasty! I have all the ingredients on hand for this one (always a big plus). I can't wait to make this!

Interesting sauce and interesting ingredients but i will try to put some chilli on it. I`m curios how will taste. Thanks for sharing.

Hi! I was wondering... about how long will this probably last in the fridge?

I have been making this BBQ sauce for well over a year now. I have substituted the pepper for 1/8 tsp cayenne pepper and add 1/2 grated onion (I use a microplane. We love it!!!

Looks yummy but an awful lot of sugar -- white sugar, brown sugar, corn syrup plus the sugar in the ketchup. Have you ever tried cutting some of the sugar back? Wonder how far you could go without seriously affecting the taste.

Would this be okay without being refrigerated? I'm looking for something to make as a Christmas gift...

Would this be okay without being refrigerated? I'm looking to make it for a Christmas gift...

Faiths if you want to give this as a gift you would have to process it (can it with a water bath), otherwise it has o be refrigerated.

did that and it turned out perfect! thanks!

If u put ur bottles in the oven at 120 degrees Celsius and bottle and cap ur sauce hot it will last for a year in the cupboard. I do it with my tomato sauce and it has never spoilt and I make 100s of bottles a year

Came across this on Pinterest a few nights ago when my husband insisted he want BBQ chicken for dinner... Only problem was we had no sauce. I did modify it a bit. Less sugar, no corn syrup (didn't have it) and I also subbed the black pepper for cayenne. It was delicious! And I've had to make another batch since then because he used it on his scrambled eggs and wants me to try a bbq ckn omelet next! Thanks for sharing. And yes, the Neelys are a bit touchy feely and you put perfectly why I don't watch their show! :-)

Love it, but too much sugar. Cayenne is a good idea to!

Looks great! I will be using this recipe this weekend so that I can use the BBQ sauce on my Crock Pot BBQ Chicken Wings!! Thanks again!!

Look Great!! I will be using this recipe this weekend and using this BBQ sauce on my Crock Pot BBQ Chicken Wings! Thanks again!!!

Looks great. Will be trying this soon. Thanks for sharing