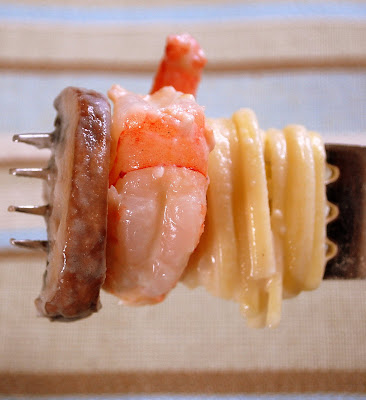 This is a recipe from my mother-in-law Carol. She raved about it and said I just had to make it, so I did. It was delicious and easy. The secret ingredient - a can of Progresso New England Clam Chowder, or as we say here in RI...Chowda. The sauce is made in the blender. How easy! Saturday we had a late lunch or early supper, Lupper as John calls it. 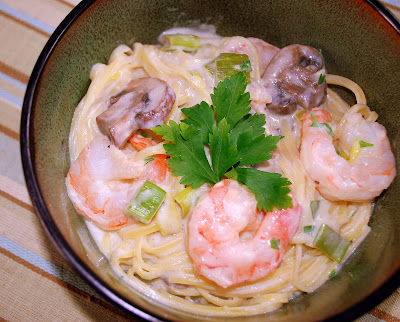 Creamy Seafood Pasta
Printable recipe
16 ounce package uncooked linguine (we used thin spaghetti cause my husband is pasta challenged and can't tell the difference so the spaghetti went into the pot before I noticed he had the wrong pasta. I love to hassle him. It really doesn't matter what pasta you use).
1 (18.5oz) can of Progresso Traditional New England Clam Chowder
1 cup milk
1 cup shredded Parmesan cheese, divided
2 cloves of garlic, minced
2 tablespoons olive oil
1 ½ pounds uncooked, de-veined, shelled large shrimp or the same amount of pre-cooked shrimp
1 8oz package of fresh sliced mushrooms (I used baby bellas)
4 scallions (1/4 cup), chopped (I was out of scallions so I used 2 leeks, finely chopped, so good)
¼ to ½ teaspoon crushed red pepper flakes (optional)
½ cup fresh chopped parsley
Salt & pepper to taste

Cook the linguine till al dente in a large pot of salted water.

In a large skillet heat the oil and add mushrooms and onions. Cook until they are just softened, about 8 to 10 minutes. While the mushrooms and onions cook, make the sauce. In a bender place the clam chowder, milk and ½ cup of the Parmesan cheese, and the garlic. Blend until smooth.
Add the shrimp to the pan and cook just until the shrimp turns pink. If using pre-cooked shrimp cook until just heated through.

Stir in the pepper flakes if you are using them. Add the soup mixture to the skillet and cook until heated through. Add in the parsley and season with salt and pepper.

Pour over the cooked linguine. Toss the coat. Top with additional ½ cup Parmesan cheese before serving.

Note from Mom when she sent this recipe: This is very, very good.

Note from Lisa as she blogged this recipe: You were right, thanks Mom!

We paired the pasta with Pull Apart Biscuits.

This is like a deconstructed, savory version of monkey bread. One of my co-workers sent me this recipe from a Pampered Chef party she had attended. She really liked it, so of course I had to make it and of course I had to put my own little spin on it like I always do. I ended up changing almost everything about it, even the name, so it really isn't a Pampered Chef recipe anymore. I claim it as my own. So there PC people.

Preheat the oven to 350. Place the melted butter in a bowl. Add in the crushed garlic and Italian Seasonings. Mix to combine. Cut the biscuits into quarters. Add biscuits to the bowl and toss to coat pieces evenly. Fill an 8 or 9 inch ungreased cake pan with the biscuits. Bake for 12 to 15 minutes or until golden brown. 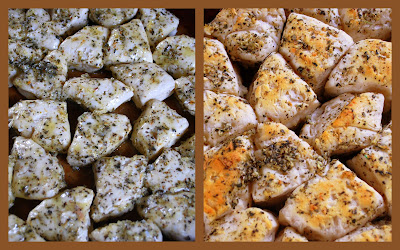 I used a stoneware pan that wasjust a bit too big for this recipe so my biscuits didn't puff up together as much as I wanted them too. Next time I will use a smaller cake pan.
These were flavorful and really tasty. The whole pan was gone in about 15 minutes.

Posted by The Cutting Edge of Ordinary at 2:45 PM

Oh. My. Stars. I am writing a grocery list for Mr. right now to send him straight to the store so that I can make this scrumptious looking meal. To hell with burgers! LOL!

Oh it sounds so good...love the seafood and pasta thang!

You are so right about the younger generation! I realized that I had been derelict in my duties when my daughter couldn't make spaghetti by herself. :oops: My son can make a decent crepe but my daughter is completely lost in the kitchen. This will be an excellent recipe for her to practice with. Thanks.

It looks so yummy, I love seafood and pasta...creamy sauce...it all blend so well.

WOW this is easy, It looks fantastic! You gotta love that combination!

Mmm way to dress up the biscuits.

And what a great photo of the elements on the fork. I love it. I wish Steve liked shrimp and creamy sauce more. Either or, I would be happy with. Sigh.