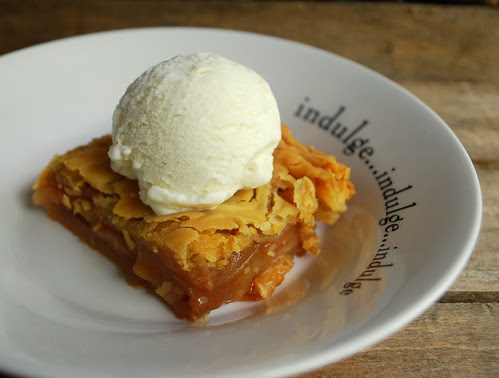 I don’t remember how I found this recipe, but somehow I stumbled upon the site called Obama Foodorama. I poked around the site for a bit and came across an article on White House Recipes and found this recipe from the First Lady herself.

Seems this is one of the Presidents favorite desserts. The fact that this recipe calls for 3 refrigerated piecrusts makes me love the First Lady even more. I am not a snob when it comes to piecrust. I can make a great piecrust, but the convenience of using that little red box saves me time, and that is a precious commodity to me. 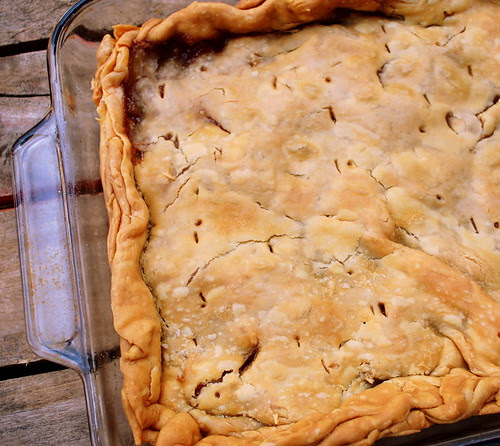 Here’s some info from the Foodorama on Mr.Obama’s cobbler submission for Yankee Magazine:

I've been making this cobbler for a long time, so I usually just eyeball how much needs to go in," Mrs. Obama told Yankee. "People might want more or less sugar, but this is how our family and friends like it...Bake at 300 for up to 3hours--that's what makes the crust flaky, like Barack likes it. This recipe makes one cobbler, which is like a double pie. "The President has repeatedly gone on the record about liking flaky crusts and cobblers; he now refers to White House Executive Pastry Chef Bill Yosses as "the crust master."

Let me just say this tasted terrific, but I would not call this a cobbler. This is one big apple pie, which would be great to serve at a party or cookout. It makes one big ole pan of pie. You could feed the masses. This is the first "cobbler" recipe I’ve seen with a 3-hour bake time. I guess this would be perfect to make in the fall and winter, since the house would smell like apple pie for 3 hours.

Mix these ingredients together in a bowl and let it sit in the refrigerator overnight so the spice goes all the way through the apples.

Preheat oven to 325 degrees. Butter and flour the bottom of a large baking dish. I used a 9x13 stone baker. Roll out three piecrusts really thin--as thin as possible. Layer the bottom of the pan with 1-1/2 of the piecrusts and prick a few holes in it.

Pour the apples with the liquid into the pie pan. Dot 3/4 of a stick of butter around the apples. Use the final 1-1/2 piecrusts to cover the apple mixture entirely (let the pie crust overlap the pan). Pinch the edges of the dough around the sides of the pan so the mixture is completely covered.

Melt final 1/4 stick of butter and brush all over top of crust. 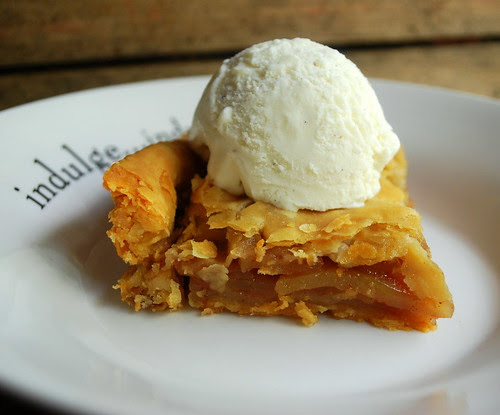 Reduce the oven temperature to 300 degrees. Bake at 300 for up to 3 hours -- that's what makes the crust flaky, like Barack likes it. Put the cobbler in the oven and go for a walk, go to the store, or do whatever you have to do around the house. Start looking at the cobbler after two and a half hours so it doesn't burn.
Posted by The Cutting Edge of Ordinary at 7:05 PM

I love the sound of that pie. I have some elderly apples in my fridge. I might just have to try it. 3 hours though, that is an enormous amount of time. Does it make it very crunchy??

PS I clicked on your blog somewhere because I love the title... that is probably the most awesome blog name I've seen!

PPS on the strength of that apple pie sitting on that cute plate, I'm going to "follow" you!!

Ok I blogged about it too! I hope you don't mind I borrowed your photo?

Different apple cobbler, looks delicious, love the way you have represented it :)

I have book marked this post, so I can make it in the fall. A lovely post, beautiful photography, and a great blog. I'll be back for more. . .

Beautifully photographed, and love that cute plate the cobbler/pie slice is sitting on. Looks delicious and very Autumnal!

Followed you from Sage Trifle. This is a beautiful pie & your photos are gorgeous.
I'll be back for more visits!