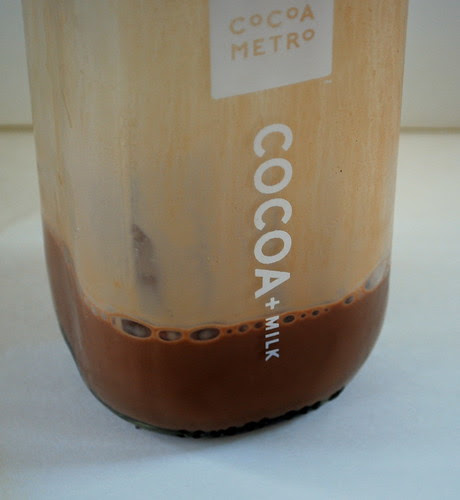 Last week I was contacted by a very nice man named Mike from a company called Cocoa Metro, in nearby Massachusetts. He had visited my blog and asked me if I would like to try some of his very fine drinking chocolate.

Now, I don't know if Mike read through some of my posts and realized that he was dealing with a major chocoholic when he asked me to try his fine product, but I wanted to reach out through the computer screen and shake him by the shoulders while shouting "you have made my liquid chocolate dreams come true sir", but instead I typed back "Yes kind sir I would be delighted to partake in your delicious milk". Ok I really didn't type that, but it was kinda the gist of it. I think I had a tear in my eye.

Mike sends his driver Dean to deliver the milk to my back door. Three bottles of liquid gold, er, I mean chocolate. I stashed the 2 other bottles away in garage fridge. I put one bottle in the kitchen fridge. I wasn't long before it was discovered and I heard "Mom when can we open that bottle of chocolate milk?"

Open it we did my friends. 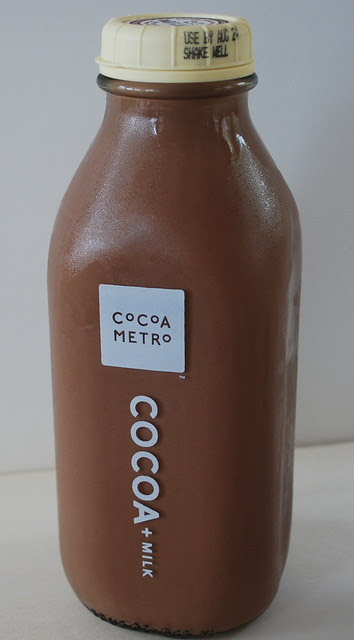 Would you like to drink a cup of heaven? Well here it is.
THE BEST CHOCOLATE MILK ON THIS BIG BLUE MARBLE!

No Mike did not pay me to type that. It is that good.

The four of us polished off a bottle in oh...under 4 minutes flat.

I emailed Mike back and told him that we are all already addicted and he's darn lucky that there's a Whole Food close by that carries this milk. Maybe Dean could just come by, oh say, every week or so and bring me bottles upon bottles of it? Think that would fly?? Huh?? Nah, well ok, if I must go buy it, I must, and you should to. 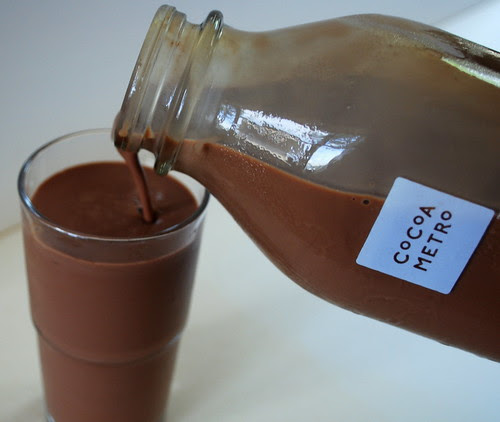 We’re not messing around here. Only the best chocolate goes into our fresh milk. We chose Callebaut Belgian chocolate for its deep and rich cocoa flavor profile. It’s high end cocoa for high end Mmmmm. And about that fresh milk—it comes from Vermont cows. Everyone knows that Vermont cows are the happiest and most socially well-adjusted cows on earth. And they don’t ever do drugs. We just can’t let our cow friends have any loathsome hormones. They’re clean.

Do yourself a favor—don’t pour it into a cup. Drink right from the bottle. There’s a reason we put it into glass.

From the Boston Globe: Dark chocolate fans who normally shun milk chocolate can now enjoy Cocoa Metro Dark Drinking Chocolate ($5 for 32 ounces), made with Belgian Callebaut natural cocoa, and plenty of it. It tastes richer, thicker, and more intensely chocolaty than most other chocolate milks. Even made with 2 percent low-fat milk, Cocoa Metro is about half the fat and calories of ice cream: 240 calories for 1 cup. The milk comes from Vermont cows; it’s custom blended at a Massachusetts dairy and sold in handsome old-fashioned, returnable glass bottles. Drink chocolate and support local agriculture. 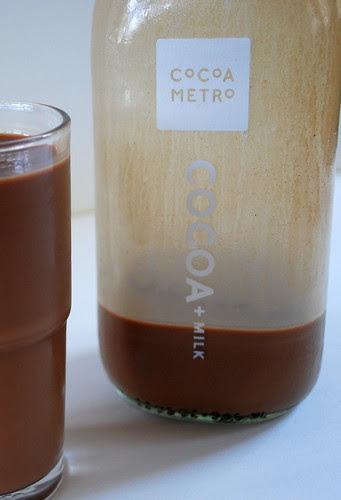 I love the glass bottle.

I love that I can get it close by.

I love that it's made with love.

I love this chocolate milk.

Let me leave you with these parting words....TRY IT and you will be as addicted as we are.

Thanks Mike!
Posted by The Cutting Edge of Ordinary at 6:35 AM

Honestly, this is just the kind of present that I would buy for myself for a Christmas present so I could drink it all myself. It looks amazing... I think I see beams of light shining down on it.

But, alas, we don't have a Whole Foods in town or I'd go get one NOW. Maybe Mike would send Dean down to Columbia, SC. No? Not gonna happen, huh. Is life fair?

If possible, I would own a cow and a cocoa bean plant thankyouverymuch.

Whoopee, I have access to a couple of Whole Foods! Surely they've shipped it to California too?! If it's available here, I'll certainly give it a try and will whoop and holler if it's that good. :) And I'll let you know too.

My Whole Foods in AZ doesn't carry it. Please convince Mike that it would taste even better out here in this heat. Just the picture alone makes me drool.. Lucky you!