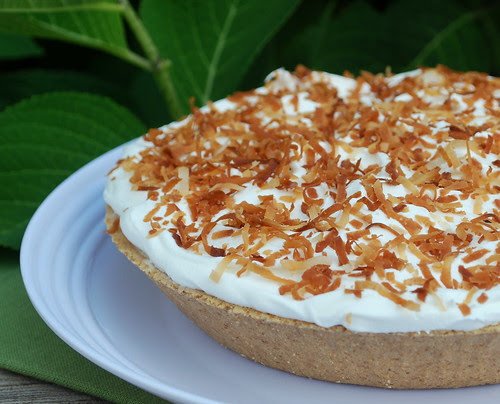 Do you remember way back when the Food Network first started? I think it was called TV Food Network back then.

I remember being thrilled that there was a channel dedicated to all things food.

Oh the recipes I'd gather and since I had a computer back in the early 90's, I didn't have to sit in front of the TV with a paper and pencil in hand feverishly trying to write down the recipe. I could go to the internet and copy and paste and shazam - I had me a recipe.

This was one of the first recipes that got from TV Food Network.

I can't remember the name of the show. I remember it was showcasing "island food" and there was a commentator with a soothing and tranquil voice, and I remember seeing this pie and thinking, I want to eat that.

It's cool, fruity and creamy all at the same time. A totally refreshing dessert with a knock-out pina colada taste. 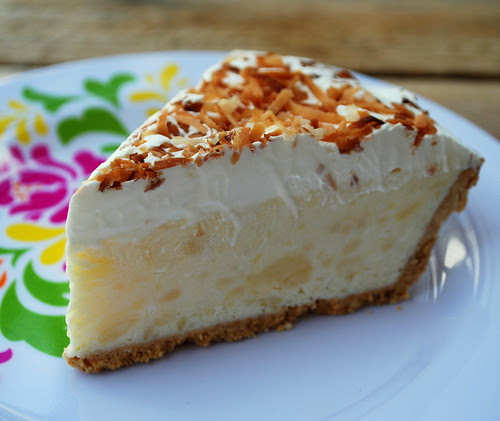 If desired garnish with toasted coconut, chocolate shavings or nuts. Return to freezer for at least 8 hours. Let stand ½ hour before serving.

* Tip: Buy the large can of crushed pineapples and you can use the juice from the can.

**Keebler now makes a larger graham cracker crust pie shell. This recipe makes enough to fill a large 9 inch pie shell, if using a smaller store bought pie shell, you will have more than enough to fill the pie shell – you can freeze remaining filling in a container for a treat later!! 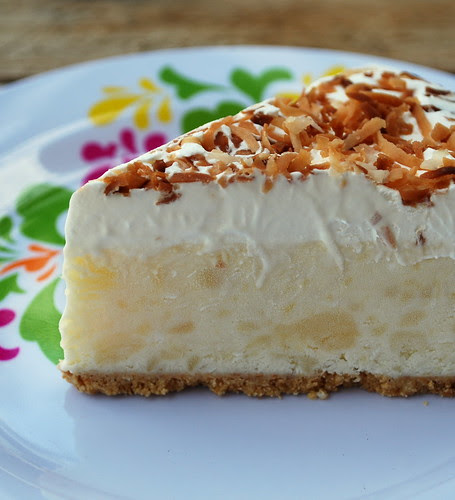 Posted by The Cutting Edge of Ordinary at 6:46 AM

This looks to die for. I love pina colada!

You had me at Pina Colada. My favorite thing other than lemon is pineapple/coconut...dreamy looking!

Looks fab, but I wonder if you could substitute Coco Lopez (Cream of coconut) for the sweetened condensed milk?

This is definitely my kind of pie! It looks delicious! I'm new here and see lots of great recipes like those puffs below!

It is a thing of beauty I tell you

Did someone say pie? My weakness in life. I would have been hypnotized without soothing and tranquil voice.

Thanks again for letting me post the recipe! It's no posted and I'm enjoying some right now. I've made 2 cakes in the past week! It's been a HUGE hit!

I remember when you had to send money to get the recipes mailed to you- of course that was only if you didn't have a computer. But can you imagine if they still did that?!

That picture of the full slice of pie could not be more perfect. Those layers are stunning.

Wow. A party in a pie! Looks melt in your mouth good.