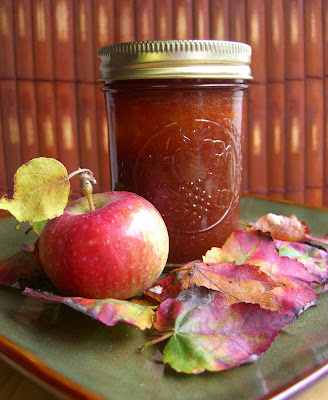 Oh we have been eating apples! Apples for breakfast, apples with lunch, apples as a snack. I have a few more apple desserts up my sleeve but after visiting one of my favorite blogs, Blue Yonder, I was struck with an apple epiphany…Apple Butter! Why didn’t I think of it before? Stefani at Blue Yonder is so smart; she makes apple butter in her crock-pot! Genius!

Tati and I had gone shopping and when we got home she helped me peel and chop all 6 pounds of apples. We didn't finish until after 10pm, but it actually worked out well cause these have to cook for 11 hours, so putting them on before bedtime was the smartest way to do it for me. The smell that we woke up too was heavenly. The whole house smelled like baked apples. 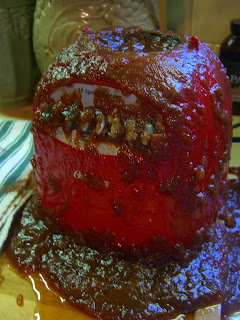 I started one batch in the blender, poured 6 half pint jars, filled the blender up with the second batch, pushed blend, went to lift the jar off the base, the bottom piece somehow unscrewed itself and before I knew it I had hot apple butter pouring out all over the blender! What a total mess!! I panicked and yelled for John. He cleaned up the whole mess while I whined about it.

Doesn't the blender bottom look like some kind of an alien? It even looks like it has horns and teeth. The blender couldn't be saved and ended up in the trash. Oh well. John said it was the best smelling mess I ever made. So one blender down, and more apple butter to make.

Of course we scarificed a jar and did a taste test as soon as it was cool enough to eat. It was so delicious! Not just good, not really good, it was fantastic. The only thing I did different from Stefani's recipe was to cut my sugar to 3 1/2 cups since I had picked some really sweet apples. It was perfect. No it was better than perfect. I think I need to go pick about 12 more pounds of apples so I can make a double batch to last us all winter. Thanks for such a terrific recipe Stefani.

6 pounds of apples. After weighing, peel, core and chop them (It's tastiest if you use a few different kinds of sweet apples, like Gala, Fuji, Braeburn or the Delicious varieties)
4 cups of sugar (you could probably use less)
3 teaspoons cinnamon
1/4 teaspoon salt. 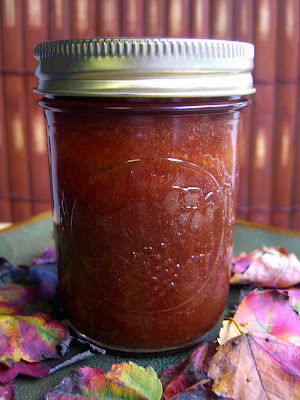 Mix the dry ingredients then pour over the apples and toss. Cook in a crockpot on high for an hour and then on low for 10 hours. Remove the lid and cook for another hour. At this point, you can put it through a food processor or blender to make it extra smooth. Just do it in very small batches. It will be really hot and could burn you.

Spoon into clean jars (leaving about a half inch headroom), put the lids on and process in a hot water bath for 20 minutes. Ours was gently boiling.

If you want to skip the hot water bath, you can just freeze your jars (plain old jars have worked just fine in the freezer for us). We tried freezing with one of our jars of apple butter, just to see if it would alter the texture once it was frozen and then defrosted. Nope, no difference. It worked great!
Posted by The Cutting Edge of Ordinary at 4:40 PM

The apple butter looks delicious! What a mess with the blender...it looks like something out of a horror film. I've got it in my mind to make pumpkin butter this year. After reading your post I think that I'm going to try it in the crock pot.

Your Apple Butter sounds yummy- I have to make it- I think perhaps half the recipe because I'll end up being the only one in my house eating it all and my hips dont need it!What do you put apple butter on besides toast?

I am tagging you - so go to my blog and check out todays post...
Have a good night!

Oh gosh NO! I feel so bad about your blender!!!

I'm going to have to go back to that recipe and soup up the warning about the blending. I'm so glad that it didn't burn you!

I'm glad to hear that you like the apple butter at least. We've given away so many jars now that we had to make more this weekend. We can't get enough of the stuff!

Apple butter in a crock pot? That's brilliant! You're right - the blender does look like a creepy alien. Good thing you've got such a great hubbie to clean it up for you.

OMG! Yes, you're poor lil blender did look like an angry alien. So sorry it didn't survive the "experiment." MUHAHAHA!

That apple butter sounds delicious. Too bad I do not have access to actual trees. I guess I'll have to replay on the local grocer, but...they won't be the same.

I'm printing off that recipe. Someday, I'll have access an orchard. One can dream.

I bet it's delicious, thanks for sharing your trials and tribulations.

I love apple butter! I am going to be making some of this. Mr. has been loving the recipes I've taken from your site and I tried the Easy Apple Cake last w/end and it was a HIT with my family. I'm making more tomorrow. :D