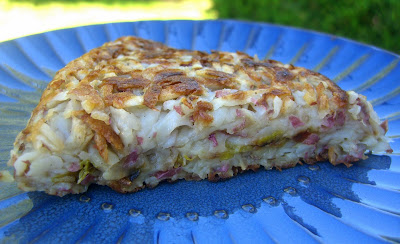 Potatoes and cheese. Yum. What combination is more luscious? Maybe chocolate and strawberries, but potatoes and cheese are a close second in my book. I came across this recipe in Yankee magazine. I read the name of the chef, Rick Gencarelli, and thought it sounded familiar. Where had I seen that name before? Oh yeah, I just ordered a cookbook he co-authored: Cooking with Shelburne Farms: Food and Stories from Vermont. I've bookmarked quite a few recipe already, so get ready for some Vermont eats.

The hardest part of this whole recipe was flippin' that potato cake. I was screeching while I flipped it onto a plate. I breathed a big sigh of relief when it actually worked and was in one piece! 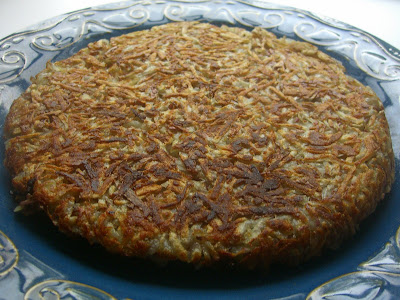 In a medium size cast iron fry pan heat 2 tablespoons of olive oil over medium low heat. Add the leeks and a big pinch of salt. Cook, stirring often, until leeks are silky and lightly browned (about 20 minutes). Remove from pan.

Rinse the potatoes well, but don’t peel. Shred on a box grater. Place shredded potatoes on a clean dishtowel and sprinkle with another generous pinch of salt and a few grinds of pepper. Toss potatoes with your hands to season. Gather the towel corners together and twist (over a bowl or sink) to remove as much of the moister as possible.

In the still warm fry pan, heat 2 tablespoons of olive oil over medium heat. Add half the shredded potatoes in an even layer, pressing them into the pan. Add leeks and cheese in an even layer. Add remaining potatoes and press into top of pan. Cover the pan and cook until potatoes are golden brown on the bottom (peek with a spatula), 8 to 10 minutes. Turn a plate (larger than the pan) over on top of the potatoes. Place your hands firmly on top of the plate and carefully flip the pan so the potato cake is on the plate.

Heat remaining oil until shimmering. Slide the potato cake back into the pan, raw side down, cover and cook 8 to 10 more minutes. Slide from pan and let rest 3 – 5 minutes before serving.

This was absolutely delicious. Crunchy potatoes with creamy cheese and leeks in the middle, oh my, it really was outstanding and now that I'm not afraid to flip it anymore, I will make this again.
Posted by The Cutting Edge of Ordinary at 3:20 PM

you have to make this your entry into the potato ho down! glad to see you are okay after hanna.

Yes potato ho, you must enter it! Looks and sounds amazing.

These look great and and you are too! I’ve sent you an award to attest to that fact - you can grab it on my site http://lisasmagicsprinkles.blogspot.com/.

Your potato cake is so neat and tidy!
I'm so impressed that you flipped it without even catching the merest edge.

Sounds delicious with the leeks and cheese.

Sounds so delicious, I am a fan of the potato-leek soup. Now your shredded potato cake is going to be the next one!

This looks really good! And pretty easy too.