We are celebrated New Year's with a few close friends. On the menu was:

As with many of my recipes, I don't use specific measurements, I just kind of toss stuff in until I think it looks and smells good. For these recipe I just eyed everything. The ingredients can vary depending on what I have in the fridge at the time. Here's what went in this time (all ingredients are approximate). 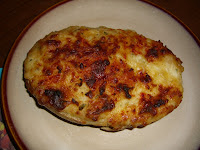 
Bake the potatoes in a 350 degree oven until they are fork tender. I let them rest for about 15 minutes, cut them in half and then scooped out all the insides. I then return the skins to a baking sheet and put them into a 350 oven for about 10 minutes, just until they are a little crispy. I think this step is crucial. You don't have a soggy potato bottom. Mash the potatoes with the half & half. Stir in the sour cream, cheeses, salt & pepper. Add the shallots and garlic. Let the skins cool for a few minutes then stuff them with the mixture.

Since I prepped these a day ahead of time, I stored them in an airtight container in the fridge. To re-heat, let them sit at room temp for at least an hour then put them into a 500 degree oven, yes you read that right, 500 degrees, trust me, it works. Bake for 10-15 minutes or until the tops are nicely browned. 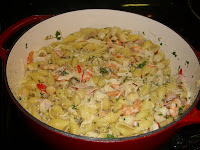 1 pound medium shells (or any other pasta with a little nook or cranny for the sauce to cling to)
1 pound bay scallops
1 pound medium cooked shrimp
1 pound imitation crab (yes, imitation. I've tried to use real crab and the kids and hubby would rather have the imitation, which is usually Alaskan Pollock and not crab at all, but they like it).
1/2 pound clams
6 - 8 tablespoons olive oil
6 tablespoons butter
2 - 3 cloves garlic
4 tablespoons Pesto
Fresh parsley
Pecorino Romano cheese


Boil your pasta and have it ready for all the seafood to go into. In a large skillet heat the olive oil and butter. Add the garlic and heat about 3 minutes. At this point when the oil is good and hot I throw in the scallops and crab and heat them through, another 3 -4 minutes, then in go the clams and shrimp, heat those for another 3 -4 minutes. Now add the pesto to the hot pasta. You don't want the pesto to overpower the dish, just put enough in to give it little more flavor. Grab a handful of fresh chopped parsley and another good handful of cheese...into the bowl of pasta it goes. Now transfer everything into a BIG pasta bowl or pan. You need room to stir so don't use a dainty little bowl for this. Top with more cheese and serve immediately.

Needless to say we were all stuffed and everyone sang my praises about the meal! We set the kids up in the living room, closed the door and told them we would see them at midnight. Someone went and got Taboo, a game we have played many times over the years. When we first began playing a long, long time ago, Tati was excluded because her knowledge of the English language was so poor that she only knew the word on the card about once every 25 cards. Really, I'm not kidding, she would pick up a card, look at the word and say "I do not know this". Well since she has mastered the language (for the most part, see cot comment coming up), she can now participate which is much more fun for all of us.

We split the teams into guys and girls. Now take into consideration that the girls were not drinking. Tati had 2 shots of Jagermeister early in the night, and the guys....well they were drinking. By 11:45 the Jagermeister bottle was empty and Ken and John P were the only ones drinking that. My John's choice of beverage was tequila. Ugh! Anyway.......I cannot begin to tell you how hysterical a night we had. I laughed so hard, so many times my stomach muscles ached this morning.

Here is just a few seconds of the game. Notice Tati's unique description of Lady Liberty. This video my not be safe for work cause Ken was way drunk and fondling himself.

A human like building?? At the very beginning of the video you can hear Ken say "COT". Earlier Tati picked a card that said COT and she had no idea what it was. Her husband insisted she knew, she insisted she didn't, after a 5 minute argument we let her pass on the cot card, but someone brought it up like, oh every 2 minutes in the game. We had a lot of fun. A very happy New Years indeed.

Mitch we all missed you.

P.S. - Yes the timestamp thingy on this is makes it look like I posted this before New Years cause I had typed out the recipes earlier in the day and I'm too lazy to cut and paste everything into a new post....so too bad.

Posted by The Cutting Edge of Ordinary at 12:16 PM