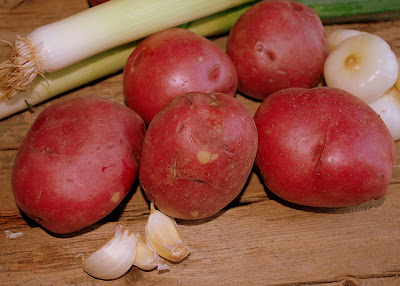 It's another blustry day in Rhode Island. Wind chillin' cold is knockin at my door. I'm not lettin' it in. In fact I'm going to kick it to the curb with a hearty and creamy bowl of soup. Then after a long day of taking down all the Christmas decorations, making over 50 meatballs for future dinners, and finally getting my house back to normal, I am going to park my behind on the couch and watch movies (New Indiana Jones...I know I'm a bit behind the times when it comes to movies.) I am going to snuggle under a warm comfy blankie with my husband. I might even make us both some homemade hot moco-cocoa. It's gonna be a good night. 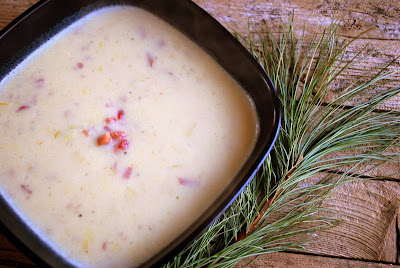 I found this recipe on a blog called Mennonite Girls Can Cook. I had no doubt that they couldn't. Lot's of great recipes - check them out. I adapted it a bit here and there, and made the addition of pancetta.

In a large heavy bottomed stock pot cook the pancetta until golden and crispy. Remove from the pan with a strainer and set aside, leaving the remaining oil in the pan. Add the onions, leeks, garlic and 2 tablespoons of butter. Cook over medium high heat until onion and leeks are just beginning to turn golden.

Add in the sliced potatoes, chicken broth, half & half and 2 bay leaves. You want the broth to cover the potatoes. At this point you can add what you like for seasoning. I added in salt, pepper, a pinch of tarragon, and another pinch of basil. Up to a full cup of half & half, or heavy cream can be added to this recipe, but I found just a 1/2 cup of half & half made it creamy enough.

Bring to a boil, then reduce to a slow simmer. This batch cooked about 45 minutes. I stirred it every once in awhile to break the potatoes up a bit. I didn't skin my potatoes. Once the potatoes seemed like they were breaking down, I took my stick blender and mixed it for about 30 seconds. I didn't want to break up all the potato pieces. I wanted to leave some whole. If you'd like a true "creamy" soup, you can certainly blender it longer. The last step is to add the pancetta back in. 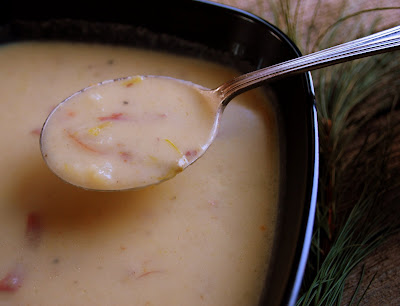 A soup that will warm your bones.
Posted by The Cutting Edge of Ordinary at 3:39 PM

That looks like terrific soup. Will have to add it to my pile of tasty things to make! Thanks for sharing.

that soup is beautiful! as for my layout, we will get you up and running whenever you have the time, i'm really looking forward to doing it!

I see this soup posted about from time to time, but never with pancetta. That makes it far better in my book. Yum.

That looks cozy, comforting, and delicious! Perfect for a cold night.

Looks wonderful! Will try it tomorrow as a prelude to our Easter dinner... Merci!

Looks terrific! I will try it tomorrow as a preview to our Family Easter dinner. Merci!