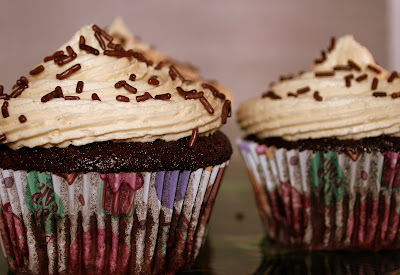 Mocha. One of my favorite flavors. Maple, another favorite. Why not combine the two? Ok...done! I haven't made cupcakes in a while. This is yet another New Years Eve recipe. I figured cupcakes would be better than a big heavy dessert. Little portable handful's of goodness.

I found the cupcake recipe on Janet is Hungry. Her recipe had a mousse filling. Well let me tell you. The mousse did not work out for me. I made a batch and it was a total mess. It came out goopy and really not that flavorful at all so I opted to just ditch the mousse and make some buttercream frosting. While my frosting was mixing away, my brain was churning trying to figure out what else I could add to kick it up a notch. After a quick visit to my spice cupboard, I came back with a bottle of maple extract in hand.....a few splashes later....maple buttercream frosting. To die for. 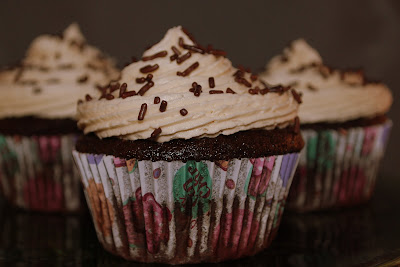 It must have been a hit cause I had to stop Tati from removing the frosting off the cupcakes to eat it separately. Definitely some good eats. The mocha cupcake recipe is here.

Here's my recipe for the Maple Buttercream Frosting:
Buttercream Frosting
6 ounces unsalted butter, room temperature
2 ounces shortening
1 egg, room temperature
1-pound confectionery sugar
1-teaspoon vanilla extract
Approximately 1/2 teaspoon of maple extract
In a mixer with a paddle attachment beat the butter and shortening until light and fluffy, about 3 – 4 minutes. Add the egg and beat until combined, about 2 more minutes at high speed. Work in the pound of confectionery sugar a ½ a cup at a time. Turn the machine off when you add each addition, re-starting it slowly each time. Once all the sugar has been added add in the vanilla and beat until frosting is smooth and light, about 3 minutes. If you are not using immediately, store in fridge. Let frosting come to room temp before spreading.
Posted by The Cutting Edge of Ordinary at 8:30 AM