This is my entry into this months Potato Ho Down hosted by Cathy at Noble Pig.
Mitch and I put our creative juices to work last weekend and made up our own little recipe together. I had a bag of frozen hash browns and some Swiss and cheddar cheese. I wanted to make some kind of a potato casserole out of the ingredients I had, so we started trying this and that and before you know it, we had ourselves one delicious Swiss and Cheddar Potato Bake. You don't even want to know how long it took us to come up with that name. There were many variations believe you me. 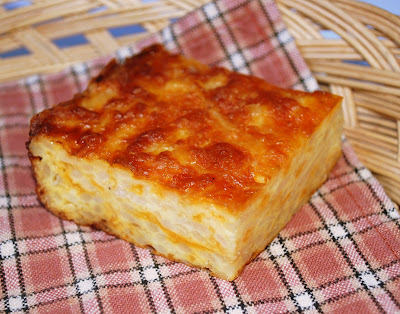 What we ended up with is a creamy, cheesy melt in your mouth, it's so damn good I could heat it up again for breakfast kinda dish. It's like one big cheesy hashbrown with a crusty top.

I do believe we hit the nail on the head with this one.

Ahhh teamwork can result in such delicious results. 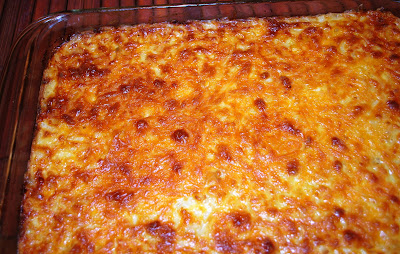 In a large bowl microwave the shredded hash browns on high for 7 minutes, stir and microwave again for another 8 minutes, or until potatoes are cooked through. (Mine still had a tiny "bite" to them). Set aside. In a saute pan cook the chopped onion with the oil and butter until translucent. Add to the potatoes and stir gently.

In another large bowl add the Swiss, 1 1/2 cups of the cheddar and 1/2 cup of flour. Toss to combine. In yet another bowl whisk the eggs, half & half and salt and pepper. Pour over the potato mixture, add the cheese mixture and mix until well combined. Grease a 9x13 inch pan. Spread evenly into the pan and sprinkle with 1/2 cup remaining cheddar cheese. Bake uncovered at 350 for 35 to 40 minutes or until brown and bubbly.
Posted by The Cutting Edge of Ordinary at 9:19 PM

Hmmm delicious, you could submit this to Potato Ho Down, They going to love it.
Cheers,
Elra

This potato bake looks incredible. I love finding other bloggers who cook with their husbands.

Congrats on being choosen as a finalist in Noble Pig's Super Bowl contest. Good luck!

I see you are a finalist in the Noble Pig's SuperBowl appetizer contest. I make the antipasto squares too and have them posted on my blog...they are sooo good.
I like you blog and have added it to my list of favorites!

Wow, I didn't know we were married!when did that happen.....hmmmm, must have spaced it out lol!

The recipe did kick butt, though. Yes, we rock the most, yo.

Mmm. This looks fantastic. I could eat this for breakfast, lunch, OR dinner!

What an interesting idea! I bet this was really tasty.

Mmmmm, this looks really yummy! It goes on my potato ho to cook list!

I've bookmarked this recipe. I looks so good.