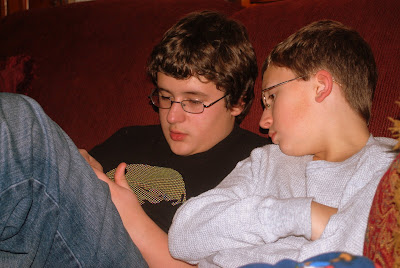 I know those of you out there who are mothers of brothers will understand this post. I have 2 boys, one 12 and one 13. Irish Twins. That's what I heard a lot when I got pregnant with Evan. I had 2 babies in 2 years. I was ecstatic. I would daydream when they were little about how they would be each other's best friend when they got older. I grew up the only girl in my family and I had often wished I had a sister to play with. I was so happy knowing that my boys would have each other, and they did. As toddlers they were inseparable, often mistaken for twins when we went out, they were each others best friends. There were countless nights of Lego building, hours spent drawing and coloring side by side, and lots of nights of cuddling up together under their blanket forts. They liked the same things....Thomas the Tank Engine, Blue's Clues, the beach, going for a ride in their Red Flyer wagon, chocolate cupcakes, bubble baths, foot rubs, Beatle lullabies and a long story before bed.
Whenever they went somewhere without each other they always thought of each other. In the bank when the teller would hand Jesse a lollipop, he would immediately say "can I have one for my brother please?". Evan would do the same thing. They really liked each other. They shared everything...friends, clothes, food, games.....they just liked being around each other.

Last night I sat in the living room and they were both huddled together on the couch playing with Jesse's iPod Touch. They were giggling and laughing together. Evan was resting his head on Jesse's shoulder and Jesse didn't even complain or say "get offa me". I was amazed. I had to sneak out to get my camera, cause I knew I had to capture these moments so that the next time they start to bicker and argue I have photographic evidence that they really do like each other..... sometimes. 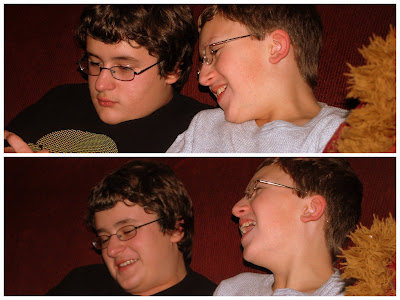 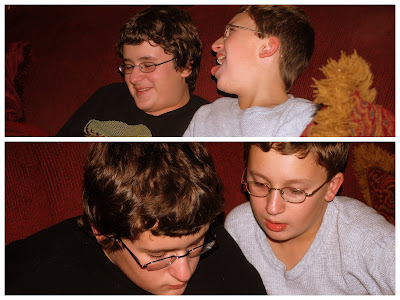 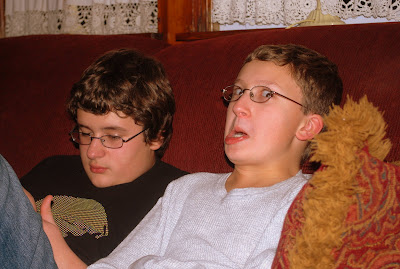 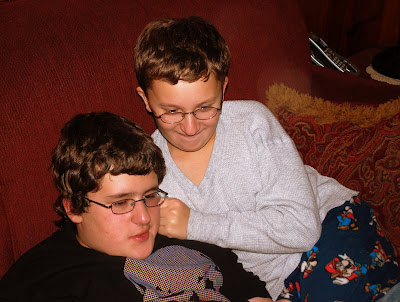 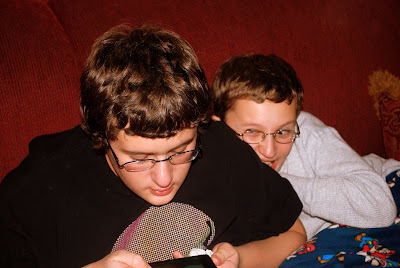 Posted by The Cutting Edge of Ordinary at 6:54 AM

:)rest assured..they will go back to the way they were when they were little.....they are at the age when it isn't cool to get along with your siblings..mine were the same why (brother and sister though) and now they are amazingly close. I love it...it makes my heart smile.

I didn't realize the "Irish twin" thing..my sister and I are a year and 1/2 apart...and everyone..i mean everyone..thinks we are twins we look so much alike it's amazing.

Love your photo's...your youngest son looks like he's a lot of fun..love the faces he is making.

have a great day,
Doreen

Those boys are so cute! I have 3 boys....3 in five years. I can so relate to your post. Mine are now, 29, 26, 24 and even tho they live all over the United States (one back with me for his "transition" period. LOL), they call each other every day. Sometimes 2x or 3x. And when they get together, they revert to their childhood.
Treasure these times.... they go by way too fast. (okay, now I sound like MY mother. ACK!)

As the mom to two boys that were close in age (less than 3 years) and that were uber - close when they were younger: I'm hoping the same thing. I keep looking back at all the good pictures (recent and past) and praying that one day they will reach an accord of some sort. Until then? Booze is a happy medium to keeping my sanity. ;)

That's very sweet. My two boys are 21 months apart and they bicker, argue but in the end they love each other.

We have a daughter and son a couple years apart, and this has happened to them as well! This to shall pass....I hope!!

Oh, this breaks & warms my heart! It's so my hope that my boys always have eachother, turn to eachother when they won't turn to me. Thank you for real pictures ~ one in words & the other in photos, of how it can go.

My lads (now 18 and 20) are 17 months apart - they've always been buddies - they rarely fought when they were young, they rarely fight now - they both have their own friends and things to do, but they're equally likely to do things together. Sometimes I wonder how such a thing could happen - my younger brother and I fought like proverbial cats and dogs - I thought thats how all close-in-age siblings acted, LOL!!!