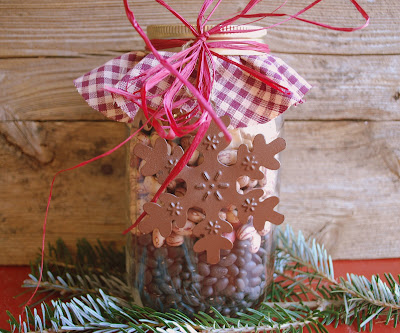 I totally just sounded like Professor Hinkle from Frosty the Snowman. Remember him? He was the magician who said "Busy, busy, busy" and "Messy, messy, messy". Well I was both of those yesterday. I was in whirlwind! Up bright and early wrapping. I wanted to get everything finished and off my mind. Four hours later...finished! Whew! I feel so much better.
My kitchen looked like a cyclone had hit it for a bit. Paper, tags, material, ribbons and raffia all over the place. The mess was so big I had to take two pictures to capture it all. 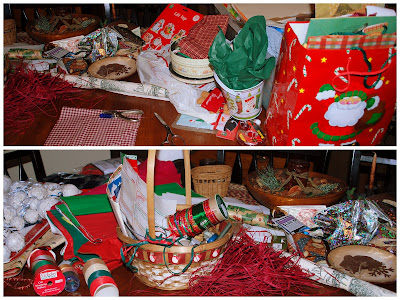 Not only did I wrap gifts, but I individually wrapped over 50 snowballs and 15 sets of primitive candy canes. I put together 6 large gift baskets and 6 more smaller gift baskets.

Then I made 40 stuffies for Christmas Eve and popped them in the freezer. One less appetizers to make! Just defrost and bake. After that it was on to Fried Chicken (post to follow). I had been promising John that I'd make it for quite some time, so I finally followed through and got it into the fridge to sit in a buttermilk bath overnight. I bought 2 whole chickens so I could make chicken soup today. That's it. I hope you weren't expecting more? Ok there's more....

I also worked on decorating my Hot Bean Dip jars, which are going to be given to some people on my list. It's a really cool idea that I got from The Pickled Pepper Patch. It includes almost everything you need to make a batch of bean dip in your crock pot. 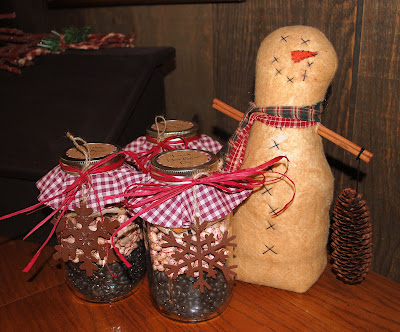 I just cut out some gingham to pretty them up. Then I attached a label and some raffia to hold a cute primitive ornament on each one. 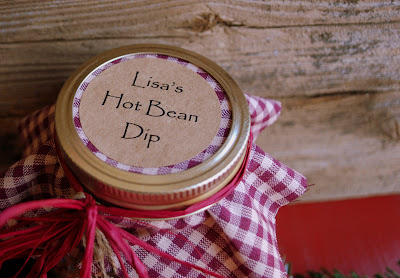 Lastly I attached the recipe which I laminated and hung from the raffia. People really seem to love homemade gifts from the kitchen. 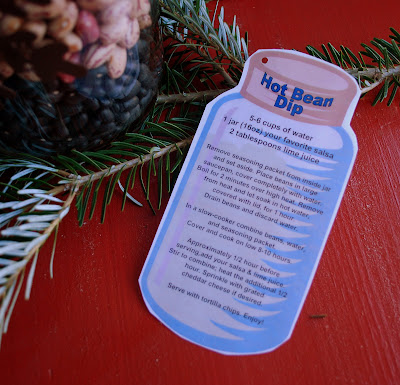 Here's hoping that lots of bean dip will be cooking in crock pots all over Rhode Island this winter!
Posted by The Cutting Edge of Ordinary at 8:06 AM

What a great gift- I wish someone would bring me a bean dip gift like that. I love the ornament on the jar and the recipe print out you made! So creative!

Love the bean dip idea! Just wonderful! Yes, I personally love homemade gifts and everyone will adore this!