and a new one just begun."
We had a great Christmas. It was loud, there was lots of food, it was messy but most of all it was fun. The boys and their cousin had a blast on Christmas Eve. 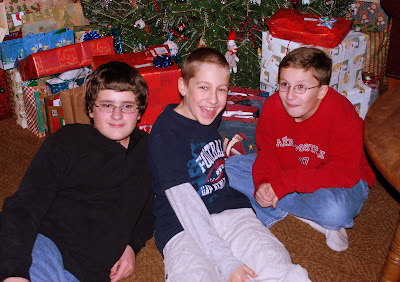 I got Mom the Wolfgang Puck knives she had been eyeing. 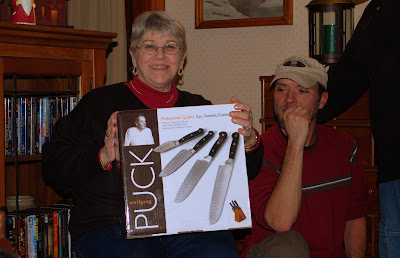 There was lots of loud discussions, mostly involving movies and music. 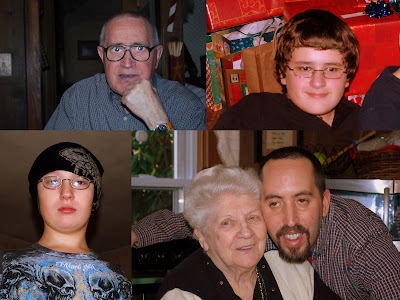 My brothers and Dad got together for this nice shot. 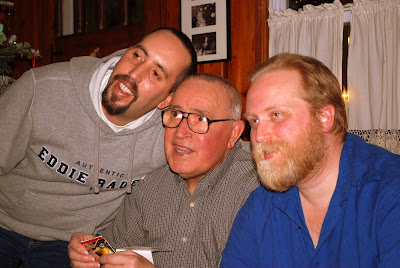 Gram came for Christmas Day. She's my Gram and the boys great-grandma. She'll be 85 in March and she has Alzheimer's. Were not sure if she even knew it was Christmas, but she did know that there was chocolate and sweets, and that's plenty enough reason for her to celebrate. She ate 9 brownie bites, cheesecake, a handful of fudge, a dozen hard candies and 2 canes canes. All that after she picked at her "real" food. The lady has a wicked sweet tooth....worse than mine! She was sucking on a candy cane, making faces at me. It was so funny. 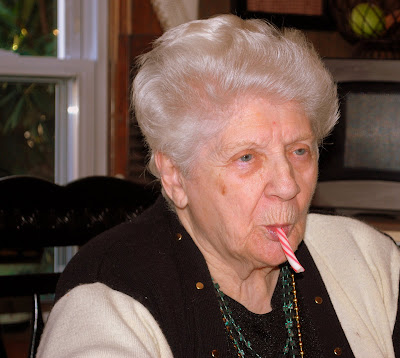 She also had a klepto moment yesterday (very common with people with Alzheimer's) She went to use the bathroom and came out wearing 2 of my rings on one of her fingers. When she sat down my Mom noticed and questioned her.

"Mom where did you get those rings?"

"These?" she said pointed to my rings on her finger.
"Yes those, let me see them" said my Mom

So she takes them off and I can now see that they are two of my rings. I whispered to my mother, those are mine.

"Mom these are Lisa's rings"

"They certainly are not, those are mine" my Grandma protested.

You can't argue with someone with Alzheimer's. There is no point in it. We just quietly slid them across the table and she forgot about them. Then I went into the bathroom and hid all my jewelry. We all had a laugh, which confuses poor Gram even more cause she has no idea why we are laughing, but she giggles along anyway.

She looks like a little imp standing near the tree. 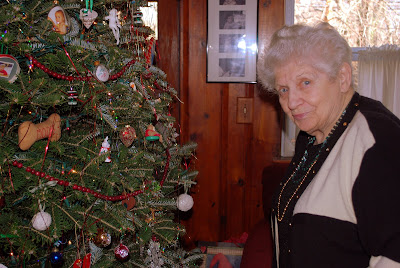 Here are the boys minutes after they came downstairs to see what was under the tree. It was 6:00am. Both of them quietly surveying what loot they received. There were no yelps or screeches like in years past, just some quiet spoken "oh cool's" and "check this out" and "awesome's". I guess they are growing up. I miss the screeches and yelps. 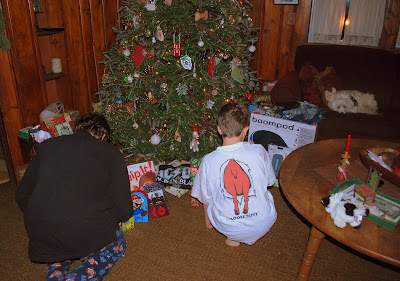 Here is my living room at 6:07am, and this is only half the mess! 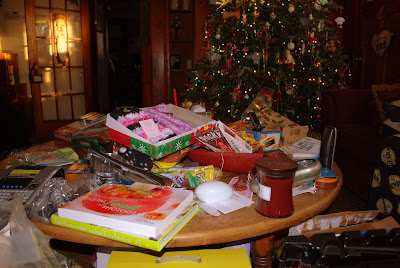 Moose so kindly serenaded us with his rendition of Rudolph (it's his favorite Christmas song). Here he is singing (we call it howling, but shhhhh never to his face, we wouldn't want to hurt his feelings). 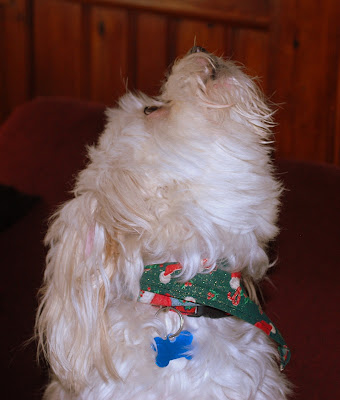 All in all we enjoyed a great Christmas. Tonight we celebrate with a few more friends, some more food and then prep for New Years begins!

Hope you all had a great Christmas too!
Posted by The Cutting Edge of Ordinary at 12:27 PM

I had to smile at the ring story. I'm sorry she has Alzheimer's but it seems like you guys have a great attitude with her. And she still got to enjoy Christmas! :)

Glad you had a good day yesterday. Your family is lovely.

Merry Christmas! I am glad you all had such a wonderful day and spent it together. I got that food photography book too! I really like the section on all the photo cheats like using soap bubbles on bacon slices to make them look freshly fried and motor oil instead of maple syrup for pancakes.