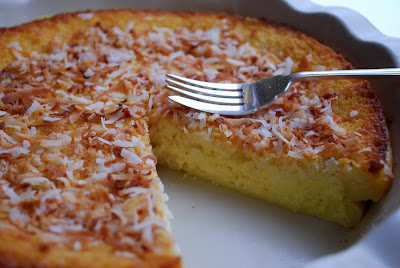 There are only a few desserts my Dad will eat. As I've said in previous posts, he does not have a sweet tooth. He does love coconut custard pie and he let it be known that there was none served on Christmas. Yeah, yeah I didn't make coconut custard pie....um I was a little busy making 20 other things! So with my Dad's guilt trip laying heavily on my mind I decided to make him coconut custard pie for New Year's Eve. Problem is.....we are getting a bit of a little snow storm right now. In fact the snow is rapidly piling up as I type this. My Dad, who has had a corneal transplant, can't drive in the dark, and won't let my Mom drive in the snow, so I have probably just made a coconut custard pie for someone who won't be showing up at the party. Dang. Someone will eat it.

Anyway off I went to take a photo for the blog. I had to remove the obligatory piece for the photo and I did take a tiny sliver of said piece, just so I could give my honest opinion of the flavor of course. It was rich, creamy, coconutty and custardy (just in case you were wondering). In the winter months I take most of my photos in my garage with the door open so I can take advantage of the natural light. This morning was no exception. As I pushed my table up as close as I could to the garage door without actually being outside, in my pajamas, in the snow, the snow started to drift into the garage an onto my pie. At first I was frustrated and grumbled a little, until I saw this perfect little snowflake. Then another, then another. I was squealing at this point. I had poor John taking a scarf and sticking it out into the falling snow to try and capture a few more. Problem was, they melted almost as fast as I could take the picture, but I did catch just a few. Now if I only had a macro lens.
This is my favorite one. See it off to the left? Just look at how beautiful it is. Looks like a little jewel. 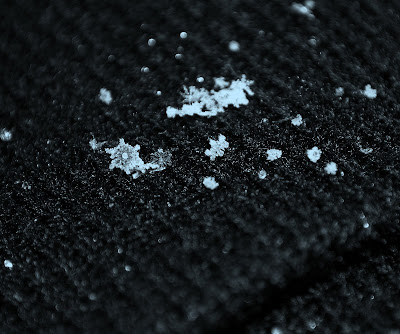 This one looks just like all those snowflakes you drew as a kid. Well at least I drew them as a kid and they almost always looked like this one. 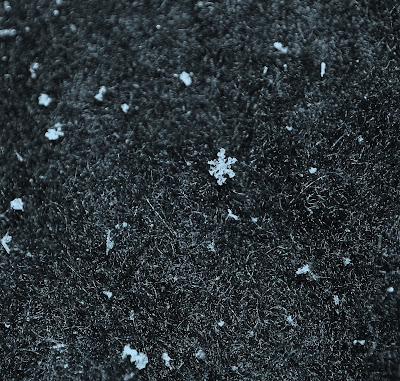 The last one I captured was this teeny tiny little baby snowflake. I cropped the hell out of the picture just to be able to see it. It's off to the left too. Really I wish you could have seen how minuscule it was. 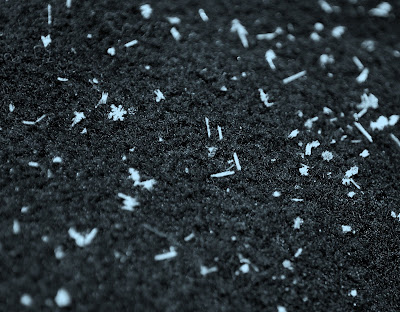 Ok enough flakiness, back to the pie. Not only is this pie easy to make, it makes it's own crust! Honest, I'm tellin' ya, it's just unreal. Oh and another thing, you make it in the blender! Only a blender to clean. How's that for easy?

Preheat the oven to 350 and spray a 10 inch pie plate with cooking spray and dust with flour, or just use Baker's Joy like I do.

Place everything but the coconut into a blender. Blend for about 20 seconds. Add the coconut and pulse just a few seconds. Pour into the pie plate and bake 50 - 60 minutes. I toasted up some coconut and sprinkled it on the top as soon as it came out of the oven. It will look a bit puffy when it comes out, but it will deflate as it cools. 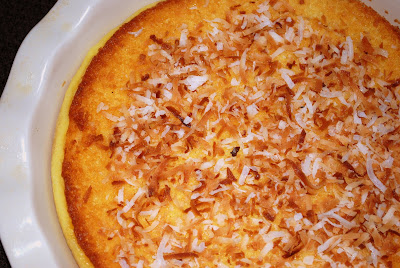 Next time I might decrease the sugar just a tad. It was very sweet. All in all if you like coconut custard pie and want to make one in a hurry, this is the pie for you.
Posted by The Cutting Edge of Ordinary at 10:58 AM

Ooh this sounds delish!! Bring it my way and I'll eat it all for you. I can't believe your snowflakes. I've never seen anything like that before.

This sounds fantastic!!! I love coconut and custard, will add this to the must try pile of recipes that is ever growing on my desk.

those pictures are wonderful!