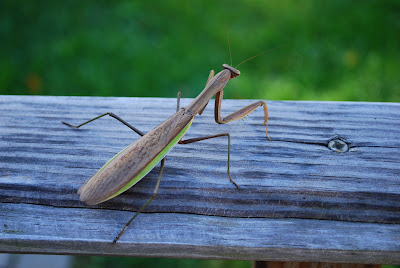 What a busy Saturday we've had. Evan had a soccer game in the morning, so I got to try the new camera out taking lots of action shots. I had a full plate today, and it had nothing to do with food. I had lots to accomplish in the house and in the yard. While I got started in the house, John and Mitch starting on breaking the garden down for the season (bye fresh veggies *sniff*). We still have eggplants growing but the rest of the garden is gone. My herbs are still holding on though.

John yelled for me to grab my camera cause he spotted a Praying Mantis. I can't even tell you how long it's been since I've seen one. It has to be at least 15 years. I've always been fascinated with them. They seem like the wise, graceful leader of the insect world to me. Those big alien eyes and wispy claws are just the coolest thing. 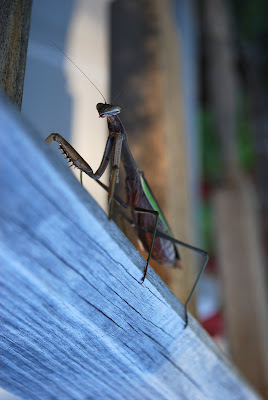 When we were young they seemed to be all over my Grandfathers garden. I remember catching them with the neighborhood kids and always releasing them cause rumor was that killing them was against the law! I'm not kidding. That was local folk law around these parts. 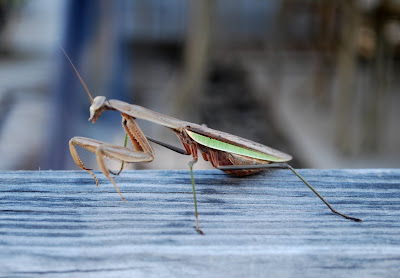 We were busy in the yard most of the afternoon, but I managed to get a great new dish into the crock pot (more on that later). We went back to the spot we found Mr. Mantis in, and sure enough he was still there. 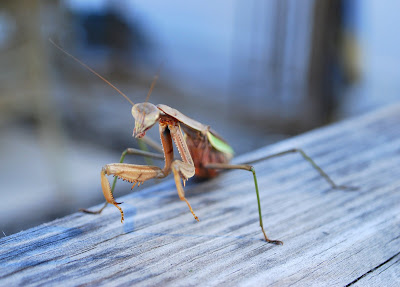 Hopefully he'll stick around for awhile. I kinda like him.

Posted by The Cutting Edge of Ordinary at 6:16 PM

Great job on the pictures.
By the way, I tried the recipe for the easy apple cake you posted. My family practically licked the pan. I'll be making that again, soon. Thanks for all your cool recipes.

I love your garden buddy. I had one trying to help me put in a sprinkler system the other day. I was over looking for a pumpkin bread recipe :) Have a good weekend.

Awesome shots with the new camera!

Cool shots, Lisa! I love those guys. Once found a mantis egg sac in a rose bush. We had a sudden cold snap, so I brought it inside and kept it in a ventilated jar to watch the babies hatch. Learned very quickly that you need a really fine mesh to corral the little buggers...

They are so alien aren't they? I would love to photograph one too. We have lots of them here usually but this past year they did aerial spraying for mosquitos and I'm thinking it must have killed them. So sad.

look at those pictures, you must be tickled pink with your new camera!